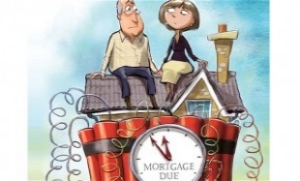 During the housing boom, more than 10% of adjustable rate loans were interest-only loans, where in a borrower makes monthly interest payments but pays nothing toward principal for a set time period. By eliminating the need to pay principal, an interest only loan option keeps your monthly payments lower. This was how some lenders during the last housing boom got borrowers into homes that they really could not afford. When prices of houses sunk, interest only became “a villain in the subprime mortgage crisis.” Now, it is making a comeback, but with a twist.

CNBC’s Diana Olick reports interest only mortgages are back, but it is different than before. However, it could open the door again to riskier loan products. Michigan-based United Wholesale Mortgage announced that it would start bringing interest-only products, but with far more safeguards this time such as:

However, critics are concerned that these loans will be used for refinances, in which case borrowers would not have to pay 20% down. They just have to show that they have 20% equity in the home. Nonetheless, federal regulators have set up safety measures to ensure that history would not repeat itself, or would it? These interest-only loans were only given to high net worth people in the past couple of years, but now it is being open to the public. At present, it is at 0.03% of adjustable rate loans. We will have to see where it goes from these.